e-Bay .. not who they say they are .. ongoing IFCC investigation

I am writing concerning a certain company that I feel NEEDS some SERIOUS investigating done into their policies and procedures and also their accounts receivable. The company E-Bay whom I was a registered member of has a policy in which you have to give a credit card or bank card number in order to sell products on their auction site.

There have been numerous reports to this company from all over the world from registered members as to certain people that are taking money from them for won auctions and either not supplying the products at all or sending Fakes in place. E-Bay only suspends the user name from their auction site but HAS to know when the frauds make a new name and use the same bank account numbers or the same credit card number.

E-Bay also has the responsibility to inform buyers of this information and warn them NOT to send money to the no longer registered members. They DO NOT do this. It is strictly by luck that a few people such as myself warn others whom have won items not to follow through in sending money. I would also like to make note that as I said earlier I WAS a registered member with e-bay. A certain individual by the name of KARL has suspended me for what he claims is I have given false contact information. I have NOT! I have an ongoing case registered with the IFCC. Case number I00071211587844. This case was begun over a certain ring in Pasadena whom are taking people's money and not fulfilling the product or sending fakes.

I have been in contact with many people over this same ring and I went through the proper channels of E-Bay's so called investigation team. This ring is still operating and still selling under e-bay using different names but still the same address for payment. I have listed this ring and the address in the bad traders list.

Right after I filed the case with E-Bay and the IFCC, at that time I had my UNPUBLISHED PRIVATE home phone number listed in the e-bay registry. I began to get calls in all hours of the night from this Lisa Baker making threats and indecent comments. My children can no longer answer the phone now for fear it is the harassment group again. So I changed the registration information in E-Bays contact info and gave my pager number. My pager can except phone numbers OR messages. My address did not change in the registration information. My daughter's name whom she is an Officer is listed now in place of mine. But again, the address is the same. In any event, this KARL without leaving a

I had before I was suspended from e-bay under this name made another name and used it to investigate this ring again. I found another user name whom gives the same address to request money

for items and I forwarded that information to E-Bay and to the IFCC under my case number. E-Bay did nothing. This person is still selling under that name and is making quite a living I might ad at taking consumers money.

I had the other registered name for 3 days when once I sent the information to them all of a sudden I get a warning from e-bay stating again that they were going to suspend me for inaccurate contact information. I wrote them back requesting that they pull my registration and suspend it. I told them that they were

embarrassed by the fact that I found out more on this group than they have and quite frankly they don't care to as they are collecting quite a bit of money for this group to list the numerous items on their site.

The IFCC has all of my information on that account and the findings along with it. There are several points I would like to point out. But I think that I have been wrongly accused as I have given all accurate information in their contact form and yet they suspend me KNOWING there is an ongoing IFCC

investigation going. They did it not once but twice and for the same reasons.

Granted under the alias I used the second time to catch this group I wasn't stupid enough to give my real identity knowing that this group would find out it was me.

Also let it be noted that E-bay is so interested in the registered members giving ALL accurate CONTACT information on themselves but yet E-Bay doesn't return the same. The public number that is listed for E-Bay has been disconnected. Ebay Incorporated, 2005 Hamilton Ave. #350, San Jose CA Tel:408 369 4830. I have another number for a Mr. Brandon or Mark whom work in investigations at E-Bay and I called it to see if he could possibly look into the matter that is on file with the IFCC case number I00071211587844. He was not concerned at all with the fraud that was taking place on the E-Bay site. His concern was how did I get his phone number. when I refused to divulge how I

got his number his reply to me was he works in investigations, not fraud.

It is also my understanding that we do NOT have to be forced into giving out our Private Unpublished phone numbers as they are trying to do here. I was also under the impression that any business that is legit is to supply a public phone number for contact by the consumer. Personally it is now my belief that

I have been suspended from E-Bay because I am too close to something bigger than the ring in Pasadena. E-Bay leaves a lot to be desired as far as taking care of it's consumers and with their own contact information.

investigation team could research it if it is kicked out to verify that this particular account number has been used by a now suspended seller and protect the buyers on their site. It also looks to me that they could WARN the already won buyers of a persons suspension before the unexpecting buyer sends

money to that seller. And considering that I have been harassed by this ring in which I am bound and determined to make sure has a day in a FEDERAL court, I don't feel I should be suspended for not giving and making public my Unlisted private home phone number.

If this Karl had done his job thoroughly he would have found that I do in fact live at this address: 4461 Green Creek

Memphis, TN 38125 and that the pager number is in fact mine 901-533-0789. I have my house note and my utility bills along with my pager bill to confirm all of this information. I have also received numerous won items from sellers on E-Bay and I have a Perfect feedback.

This KARL employee of E-Bay did not even bother to check with the sellers whom have left me a positive feedback to see if I have given accurate information. I am going to send you a copy of the e-mails I received from this KARL. And also a copy that there is in fact an ongoing Investigation with the IFCC as I send you a copy of their reply to me and my case number. I URGE you to look into the records of E-Bay as a company and their collections and the records of the people selling and that

have been suspended under different names for reports filed against them for fraud. I have several reports that I would be more than happy to share for the asking. But I refuse to give E-Bay anything else. I personally feel they are and should be held as accessories to the fact for allowing this kind of thing to continue and by making a business out of collecting fees from those without thoroughly checking them out as sellers before allowing them on their auction site. I also URGE you and beg that you look into their procedures as to giving out private phone numbers.

And the fact that they themselves have NO registered CONTACT information for the consumers. I thank you for looking

into this matter as our world becomes more and more Internet. It is easy to take advantage of people on the net. Our president signed the E-Bill but we first have to look into these kinds of companies that not only allow fraud on their site by collecting fees from sellers without thoroughly researching them through their bank cards or credit cards given to collect their fees but

also these companies that demand what they DON'T themselves give.

A working Contact phone number. I personally feel it is against my rights to be forced into giving private information in order to join an auction ring or any other type of organization. To me that is discrimination. Thank you for your time. I will send the e-mails I received from this E-Bay's employee KARL and a copy of my case with the IFCC and the pertinent information that may help you.

On My so called suspension

We regret to inform you that your eBay account has been suspended for the following reason:

While this suspension is active, you are prohibited from registering under a new account name or using our system in any way. Any attempt to reregister will result in permanent account suspension with no possibility of reinstatement. This suspension does not relieve you of your agreed-upon obligation to pay any fees you may owe to eBay.

Click Here to read other Ripoff Reports on e-bay 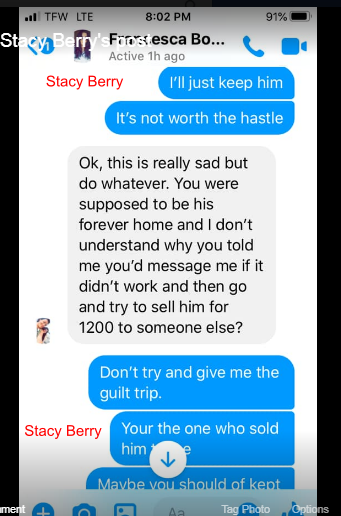 Stacy Berry Hadherway Kennels, Smarie Berry Re-homed my dog to her and she flipped it for a higher price McMillan MI

Brama Con Brama Macho patilemba I was interested in the palo mayombe tradition which is a afro Cuban tradition from the Caribbean.... 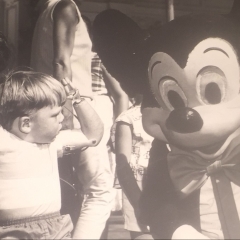