I recently purchased a computer monitor from Best Buy in my city of Montclair, CA. The reason I bought this particular monitor was because there was a $30.00 rebate offer on it.

After puchasing the monitor, I received along with my receipt two other receipts that had "rebate receipt" lettered on them along with the upc bar code dupilicated from the monitor's packing box. What was a $30.00 rebate was actually two seperate rebates. One for $10.00 and another for $20.00 to be sent to two different agencies. The instructions for each rebate included the requirement of the UPC label from the box of the monitor or "rebate receipt". There is only one UPC label on the box. After inquirying about this to a store manager, he stated the receipts had the UPC label on them and that I shouldn't cut the box in case the monitor needed to be repaired or replaced. He stated that Best Buy would not repair or replace the monitor under warranty should something happen if the UPC label was removed. He stated that the rebate receipts are provided for this reason and are sufficient proof-of-purchase to satisfy the rebate requirements. Great . . . . I thought.

I sent in all the rebate information to both agencies. About a month later, I get a notice from Best Buy's own in-house rebate center stating that I did not fullfill the requirements to receive my rebate. The letter stated I needed to enclose the "original" UPC label from the box. I called the center and asked them what this was about? I explained to them what the store manager had said about the rebate receipts and they gave me no answer. Like a looped recording they kept saying over and over, "Best Buy cannot issue a rebate without the original UPC label."

I went back to Best Buy to talk to the manager and he stated he had no recollection of us ever talking, but he would look into it and call me. It has now been four months. I have received no rebate at all, the store manager never called me, and repeated calls to the Best Buy rebate center have yielded no results.

I have heard many complaints over Best Buy as well as Circuit City not honoring their rebate programs. From now on I will not buy on-sale merchandise with the lure of a rebate because I feel it is bogus. Let the buyer beware.

Click Here to read other Ripoff Reports on Best Buy 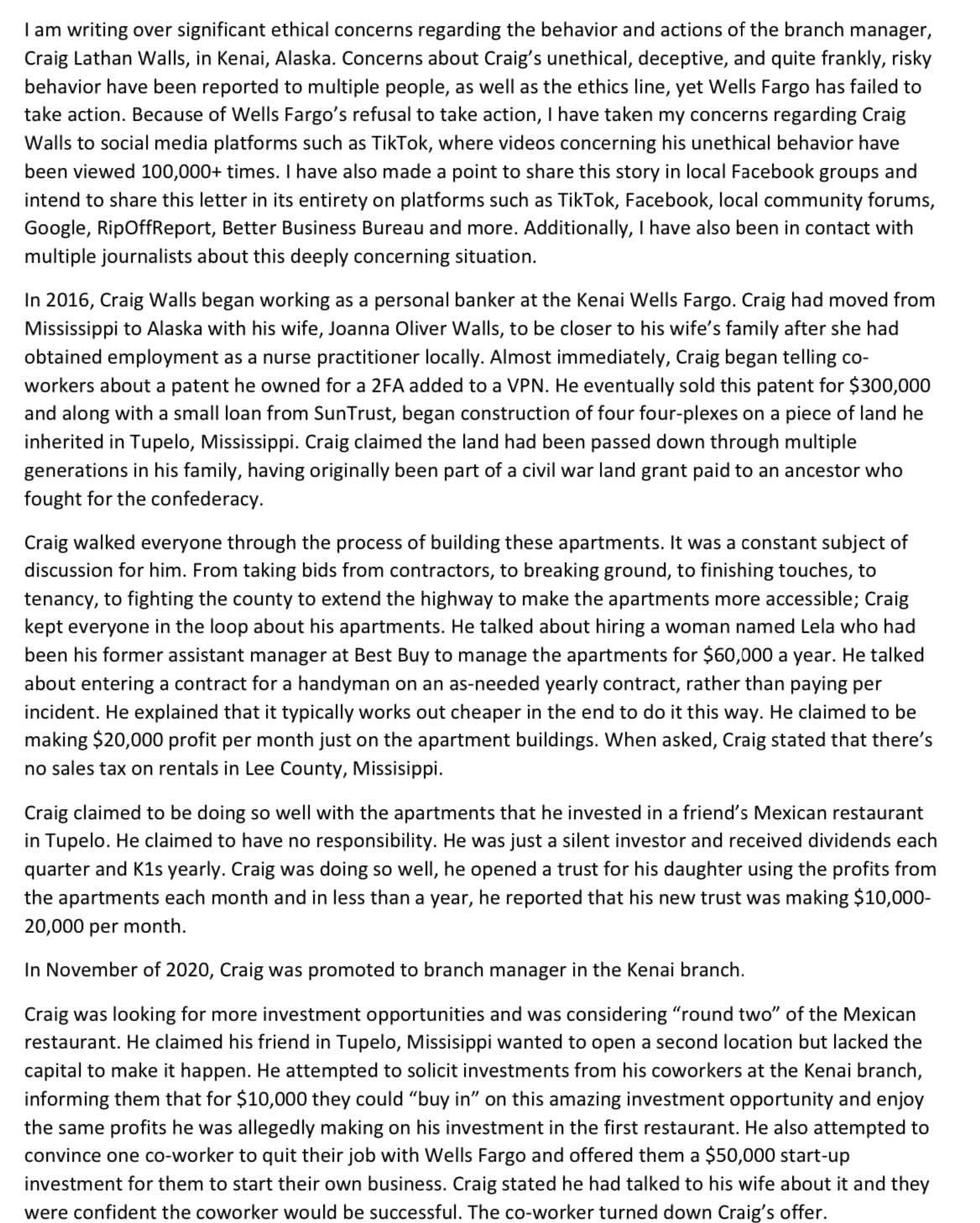 Craig Lathan Walls began working at the Kenai Wells Fargo in 2016 after moving to Alaska from Tupelo, Missisippi. He and his wife, Joanna Oliver Walls, moved to Alaska to be closer to her family. Immediately, Craig L. Walls began telling his boss and co-workers about a patent for a ...
Entity
Craig Lathan Walls, Soldotna, Alaska, United States
Author
Samantha, Soldotna, United States
Categories: Banking
2, Report: #1518080
Posted Date: May 12 2022

Best Buy / Geek Squad Best Buy refused to tell me that they could have done a factory restore to remove my virus. Fayetteville Nor...

After taking my computer to Best Buy to remove a virus, I picked it up 2 days later and they told me that they removed 4 viruses. When I got home, I discovered that the virus was still there, but I couldn't log on to Geek Squad support with my computer. So I brought the computer bac...
Entity
Best Buy / Geek Squad, Fayetteville, North Carolina, United States
Author
Brian, Fayetteville, North Carolina, Uni...
Categories: computers
3, Report: #1517805
Posted Date: Apr 22 2022

Samsung manager: Evenson id 1928&nbsp; BOUGHT FROM BEST BUY WITH 5 YR WARRENTY AND ECPIED BY 5 DAYS WHEN I REACHED OUT FOR ASSISTA...

Samsung does not stand behind their  products which I found regarding their dryers. No one uses plastic "Idlers" except them and they do not have authorized service people available and will not support their products if not their authorized service reps.  Make it impossible to ge...
Entity
Samsung manager: Evenson id 1928, Dominican Republic
Author
janice, United States
Categories: appliance repair
4, Report: #1517697
Posted Date: Apr 17 2022

Best Buy Reported my all credit bureaus as a late payment when they had the product returned. In turn reduced my credit limit and ...

Best Buy N/A On 08/20/20 I purchased a TV for my son along with a 3 year service and repair warranty. The TV has sound, but no picture. We’ve called BestBuy and arranged for service to come to the house( because they do not want you to bring the item to their store if the TV is la...
Entity
Best Buy, Mount Laurel, New Jersey, United States
Author
John Williams, Philadelphia, Pennsylvani...
Categories: electronics
8, Report: #1516147
Posted Date: Feb 17 2022

I contacted Best Buy to use their price match guarantee,  I was assisted by a representative who had me purchase the item and then said that I would receive the refund for the price difference and would get a confirmation email within 24 hrs.  After waiting 2 days I called again a...
Entity
Best Buy , United States
Author
Luis, Pasadena, United States
Categories: Apple,  DECEPTIVE ADVERTISING,  Accountability
9, Report: #1513601
Posted Date: Nov 12 2021

sad senior scam : promoted thru aarp makes it worse. had my phone for two months and it locked up on a trip. could not get  any one to answer in support nor email .   no warranty nor refund.  RIPOFF OF SENORS .   I NOW HAVE A $100 DOLLAR RED DOOR STOP !   IT ONLY COST NE $#5.00...
Entity
LIVELY, SAN DEIGO, CALIFORNIA, United States
Author
ed, kansas city, MISSOURI, United States...
Categories: CELL PHONE SERVICE PROVIDERS,  Great Call Cell phone service and cancelling them because they over charge, etc
10, Report: #1513245
Posted Date: Jul 25 2022

I purchased a 1 TB NVMe, a Samsung 970 Evo Plus on 10/29/2021. I took it home to find a 250GB NVMe drive inside the package. When I brought it back, 2 different managers insisted this could not happen and could only offer that I should call Samsung. So I am going to during business ...
Entity
Best Buy, Boynton Beach, FL, United States
Author
Thomas, Boynton Beach, FL, United States...
Categories: Computer Parts
11, Report: #1511882
Posted Date: Sep 14 2021

I purchased a tv on February 28th and I got it home noticed a small blemish in the screen. I was like damn I can live with it but it ambit worse so I contacted Best Buy they told me it was still under factory warranty and they would send out a tech. The tech came and tried to take ...
Entity
Best Buy , Charlotte , NC, United States
Author
alfonso, Charlotte, NC, United States
Categories: Smart TV,  TV
12, Report: #1511676
Posted Date: Sep 07 2021

Best Buy and GEEK squad  service contracts RIP OFF GEEK squad service contracts are a Rip Off Not only did thier technician have to come out 4 times for a repair that never got fixed...spanning over 4 months... The technician took some type of knife and tore up the freezer lini...
Entity
Best Buy / GEEK SQUAD Warranty , Fresno, CA, United States
Author
Curt, Fresno, United States
Categories: BEST BUY / geek squad
13, Report: #1511548
Posted Date: Sep 02 2021

I pre-ordered a 400.00 watch the 1st day pre-order was available.  The watch came out on Aug. 27th.  Best buy wont ship it until Sept 9th.   I should have had the watch on or around the 27th given my pre-order status.  Numerous contacts to Best Buy.  Their solution, no we wont...
Entity
Best Buy, United States
Author
Jon, BURLINGTON, United States
Categories: Audio & Electronic Retail Stores
14, Report: #1510595
Posted Date: Aug 03 2021

Real geeks A guest at my house in the USA searched on the internet for a contact number to the Best Buy Geek squad. The search ...

A guest at my house in the USA  searched on the internet for a contact number to the  Best Buy Geek squad. The search engine suggested the phone number to realgeek.org which is not the Best Buy organisation or part of it. The guest rang the number RealGeek contact number 864 302 5...
Entity
Real geeks, United States
Author
Iwatulip, United States
Categories: Remote computer access
15, Report: #1507802
Posted Date: May 07 2021

Best Buy Total Tech support coverage plan is a SCAM DO NOT GET IT ! Richfield Minnesota

I purchased the total tech support coverage plan to upgrade my arcade 1 up machine. I had a few other things that I could use help with so I thought it would be a good deal. I was wrong. After their billing department lied to me saying that arcade 1 up machines were covered under th...
Entity
Best Buy, Richfield, Minnesota, United States
Author
Travis, Godfrey, United States
Categories: Arcade & Pinball,  DECEPTIVE ADVERTISING,  failure to process refund,  Television Parts & Services
16, Report: #1507179
Posted Date: Apr 18 2021

Best buy They lied to me about phone RAM twice and then sold me a different phone. Las vegas Nv

I went to Best buy to buy a phone and got scammed twice and both times they lied to me about phone RAM. They sold me phone with 3GB ram claiming it had 4 GB. The specs on the display phone said 4 GB so I bought the phone, I went home looked at it and it had 3 instead of 4. This is B...
Entity
Best buy, Las vegas, Nv, United States
Author
Justin Mime, Las vegas, Nv, United State...
Categories: Fraud
17, Report: #1503496
Posted Date: Jan 02 2021

Roblox Corporation Best Buy Quakertown The gift cards I purchased were unredeemable and they would not give me a refund. San Mate...

I purchased 2 Roblox Gift Cards. One for $20.00 and one for $25.00.  After numerous times to trying to redeem without being able to I contacted Roblox.  First they said they were already redeemed. Next they said that they credited account $25.00. Next they said they credited accou...
Entity
Roblox Corporation, San Mateo, California, United States
Author
Scott, Quakertown, Pennsylvania, United ...
Categories: gift cards,  Gift Card
19, Report: #1503153
Posted Date: Dec 21 2020

My washer went out on 13th, we had bought it at Best Buy, with the extended warranty. When we called, they explained the process, with them coming out and diagnose the machine, order parts, waiting then re-scheduling tho come back, it could take 3 weeks......so we decided to buy a n...
Entity
Best Buy, Fort myers, Florida, United States
Author
charles edwards, Lehigh acres, Dlorida, ...
Categories: Appliances
20, Report: #1503015
Posted Date: Dec 16 2020

I returned a Sonos speaker that did not work to the Lynnwood, WA store.  They would not give me my $500 back, but put it on a Best Buy gift card instead.  Today, when I tried to use it, I find that there is only $50 on it!  T
Entity
Best Buy , Lynnwood, WA, United States
Author
Julie, So. Cle Elum, Washington, United ...
Categories: electronics