Not all Precision Tunes are Alike! ripoff Seattle Washington

I recently had a problem with my cooling system and went to Precision Tune to get it fixed. They advertise that the service is comaparable at all locations etc. So although I typically have work done at the Precision Tune in Lynwood, WA, I chose to have the work done 1.5 miles away from my apartment, 85th & Aurora in Seattle.

My story goes as follows: I stated my problem to the mechanic and he proceeded to check my story out. He decided to by pass the diagnostic and change the thermostat gasket, because this sounded like the problem. Then, I said I needed an oil change and they said no problem, I said great because most Precision Tunes (Lynwood & Edmonds) have to put the car up to change the oil and they only have one lift blab, blab, blab. Then as they were doing the oil change they filled the radiator and told me there was a crack in the radiator and the car has to stay there over night and that the radiator was a special radiator that could only be purchased from the dealer and it would cost $550. I figured since it was there, they might as well do the work, because if the part could only come from a dealer then nobody else was going to be able to get it from anywhere else. The next day they quoted me the work was going to be approximately $700 (ouch), again since it was there, etc etc. and I told them I could not get there until 4:45pm, they said no problem it would be done. So I show up at 4:45pm, and wait in a room that is 64 degrees F until 6:45pm, when the mechanics finally finish. They charge me $786.89 plus tax.

I have made attempts to clear this matter with the manager and the owner, expecting a justifiable response, with only a brush off. By the way the radiator can be had by just about any discount part store for under 200 dollars. I am now taking this matter to the regional offices and the corporate offices, and the better business bureau and would your firm to also be made aware of this situation, and ask for any advise or help you may be able to provide.

Click Here to read other Ripoff Reports on Precision Tune

Precision Tune Did not fix car, caused additional problems, got an attitude and tried to fix things that were not needed. Salisbu...

Took 2009 HHR in for oil change and to check a noise that began after last visit when they replaced an axle seal. I have been going there for almost 20 years, but no more.First mechanic (tall, personable black man) rode with me and heard the noise over the noise of the tires. Then h...
Entity
Precision Tune, Salisbury, MD, United States
Author
ERic, Princess Anne, United States
Categories: Auto Mechanics,  Automotive,  Mechanics
2, Report: #1437450
Posted Date: Apr 05 2018

Took 2009 HHR in for oil change and to check a noise that began after last visit when they replaced an axle seal. I have been going there for almost 20 years, but no more.First mechanic (tall, personable black man) rode with me and heard the noise over the noise of the tires. Then h...
Entity
Precision Tune, Salisbury, Maryland, United States
Author
Eric, Princess Anne, United States
Categories: Auto Repair Service
3, Report: #1421638
Posted Date: Jan 07 2018

I had my break light come on in my jeep. I have all the factory service manuals and chiltons. I monitored my vehicle for 2 days and had NO leaks of any sort which pointed to a faulty master cylinder. It had full fluids and NO leaks seconds before pulling it into that shop. After 30 ...
Entity
Precision Tune Auto Care, Augusta, Georgia, United States
Author
drew, Chesterton, Indiana, United States...
Categories: Auto Repair Service
4, Report: #1408033
Posted Date: Oct 23 2017

This company shouldn't be in business anymore. They'll tell you things that aren't wrong with your car that don't fix the problem.   I went to get my car serviced after it had stopped and the mechanic told me that the only thing wrong with my car was a starter. He literally spent 2...
Entity
Precision Tune Auto Care, Fort Walton Beach, Florida, USA
Author
Kingtutbabyy, Fort Walton Beach, Florida...
Categories: Mechanics
5, Report: #1405212
Posted Date: Oct 09 2017

Precision Tune Auto Care and Truck Care On 03/25/2017 I took my car into Precision tune Auto Care to be repaired because my engin...

I have taken my vehicle to Precision tune Auto care multiple times for the same repair every time I take it back to them it's like they put a bandaged on my vehicle and send me on my way . First visit 03/25/2017 the cost was 2,583.95. I took it in for leak, brakes engine light on...
Entity
Precision Tune Auto Care and Truck Care, Georgia, USA
Author
Kenneth Saulsbury, Warner robins, Georgi...
Categories: Auto Dealer Repairs,  Auto Repair Service
6, Report: #1402604
Posted Date: Sep 27 2017

I took my car to Precision Tune and had a oil change. One week later I drove home and I was going up the driveway and the oil pressure light came on. I decided to look at it in the morning cause it was night. When I got up I went outside to get a look at the car. It looked like t...
Entity
Precision Tune, Newnan, Georgia, USA
Author
timothy, newnan, Georgia, USA
Categories: Auto Mechanics
7, Report: #1382100
Posted Date: Jun 29 2017

The pre-purchase inspection portion and repairs went fine.  Everything after that has been a nightmare. The repairs done on 30 May 2017: The manager and front desk clerk (who is not a mechanic) informed us that the smell was coming from the heater core leak and it should be repaire...
Entity
Precision Tune Auto Care, Spartanburg, South Carolina, USA
Author
Ethan, Simpsonville, South Carolina, USA...
Categories: Auto Mechanics
8, Report: #1368778
Posted Date: Apr 20 2017

I went in for a $20 oil change and left with a $677 quote to fix a stripped bolt hole that they messed up in my vehicle. I came in without a leak, just needing an oil change and left with a leak and needing a whole new oil pan. They refused to accept responsibility and now I'm out...
Entity
Precision Tune, USA
Author
LaToyia, Columbus, Georgia, USA
Categories: Auto Repair Service
9, Report: #1293088
Posted Date: Mar 11 2016

Precision Tune auto Care Naeem Patel and his father who own another precision tune auto care See if the other 3 ******* people yo...

I found out that someone tried to cut off my catalytic convertor from the bottom of my vehical from Naeem Patel of Preciosion Tune Auto care on cheshire bridge. He inspected the car and told me to go and see his fateher Mr. Patel on Jimmy Carter Blv. I did he charged me lots of mone...
Entity
Precision Tune auto Care , Atlanta, Georgia, USA
Author
Dan, Atlanta, Georgia, USA
Categories: Auto Inspection
11, Report: #1192815
Posted Date: Dec 03 2014

Took a 92 Buick Lesabre here to have them diagnose the vehicle since I didn't have time and was leaving town the next day and a friend was going to be driving this for a few months while I was out of the cities.They said I have a crankshaft sensor code set and the sensor looked beat...
Entity
Precision Tune-Andover & Coon Rapids, Andover, Minnesota, USA
Author
Anonymous, St. Paul, Minnesota
Categories: Auto Repair Service
12, Report: #1177705
Posted Date: Sep 18 2014

I brought my work van there for a complete tune-up costing $446.54 It ran worse when I picked it up. Took it back the next day and they said it needed a distributor. Got a second opinion and it turns out they didn't secure the plug wires properly and one burnt up on the manifold so ...
Entity
Precision Tune, Decatur, Georgia, USA
Author
Michael, Decatur, Georgia
Categories: Auto Mechanics
13, Report: #1142029
Posted Date: Apr 27 2014

The manager told me.. brake inspection is 30 and money will be adjusted if any brake job is required.  After visually inspecting the front and rear brakes, the mechanic told me that still 25 percent life remaining.  Told that he will clean the rear rotors before mointing tires.  ...
Entity
Precision tune, Atlanta, Georgia, USA
Author
Sandy, Atlanta, Georgia
Categories: Auto Service Stations
14, Report: #1138837
Posted Date: Apr 15 2014

Do not take your care there. Used to be good but they take advantage of women. Today I was told I needed a flush on my power steering and brake fluid. Showed me the fluids and was told they were dirty and needed to be flushed. Stupid me didn't know better. After had it cleaned suppo...
Entity
Precision Tune Auto Care Alabaster AL, Alabaster, Alabama, USA
Author
anonymous, Helena, Alabama
Categories: Auto Mechanics
15, Report: #1116057
Posted Date: Jun 05 2014

Please do not be a victim and fall for this scam of a company. Took my car in for a $18.99 oil change and came out spending over $2800! Within a quick visual of my BMW, they scared me into thinking if I drove an inch further in my car that it would break down immediately and cause n...
Entity
Precision Auto Tune, Newnan, Georgia, USA
Author
Mz. Derich, Stone Mountain, Georgia
Categories: Mechanics
16, Report: #1093118
Posted Date: Oct 24 2013

On June 22, 2013 I was charged $200 more than what the owner had called and quoted me. On June 22, 2013 I was in Baton Rouge to take care of some business when my air started blowing warm. Since Precision Tune was across the street and&nbsp; I had used them before (about 8 years ago...
Entity
Precision Tune Baton Rouge, Keith McAllister, Baton Rouge, Louisiana, USA
Author
NPolk, New Orleans, Louisiana
Categories: Auto Mechanics
18, Report: #1064108
Posted Date: Jul 03 2013 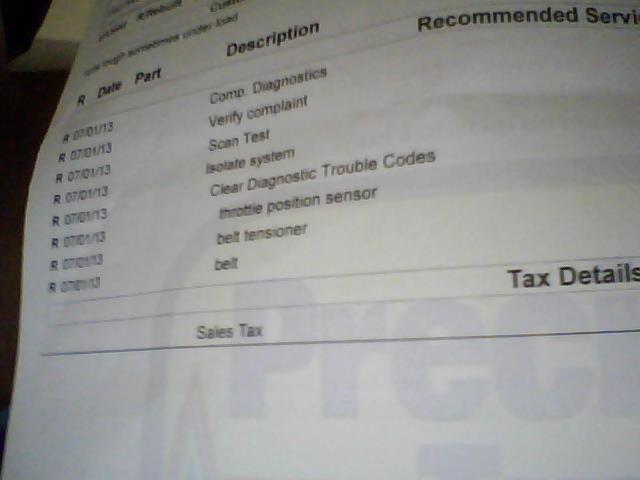 Precision caused damage to my car purposely! On 7/1/13 I went to PRECISION to have a Diagnostic Check Done, BECAUSE MY SERVICE ENGINE LIGHT HAS BEEN ON FOR ABOUT 2 WEEKS NOW. WHEN I PREVIOUSLY HAD DIAGNOSTIC CHECKS PERFORMED, THE CODES WERE FOR MULTIPLE MISFIRE, WHICH CAN BE CURED W...
Entity
Precision Tune Auto Care, Dayton, Ohio, USA
Author
Hillary, Dayton, Ohio
Categories: Auto Mechanics
19, Report: #957473
Posted Date: Oct 20 2012

precision tune The manager was very rude and teled at me told me not come by in his an said i could not report him and there are ...

&nbsp;Greenville.S.C. precision tune auto center store Manager was very rude and upset yelling and asking me to leave his store an&nbsp;get out also said donot not come back in there for any service to be done my car he didnot want me to pay for the coolant check just to get my keys...
Entity
precision tune, greenville, South Carolina, United States of America
Author
shenia, mauldin, South Carolina, United ...
Categories: Auto Repair Service
20, Report: #907803
Posted Date: Jul 06 2012

A friend of my mothers worked for this company and assured us that the new engine I needed would be done right. I had it towed over and on June 16 2012 they did the job. Upon getting it back noticed the check engine light was on. The manager saiod that was a sensor that would have c...
Entity
Precision Tune, Jacksonville, Florida, United States of America
Author
Nancy Wade, Orange Park, Florida, United...
Categories: Auto Repair Service

Onjuno.com Onjuno I received two crypto transactions via Ethereum and they did not reflect in my account nor is it still reflecti...